Pictures from first days of Universities 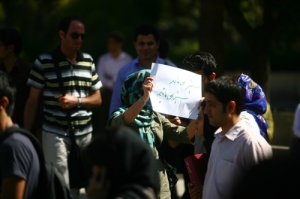 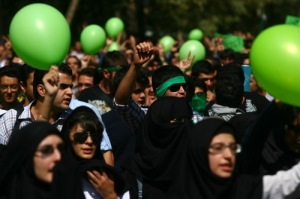 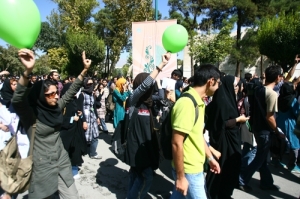 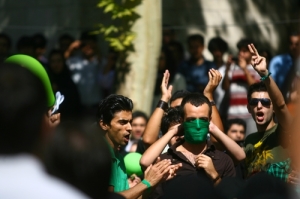 “The Strait Dope – Why Iran can’t cut off your oil”

Supertankers carry about 90 percent of Persian Gulf oil exports through the Strait of Hormuz each day, satisfying some 20 percent of worldwide demand. For maximum safety, the International Maritime Organization suggests that the huge, difficult-to-maneuver ships travel within a designated channel while in the strait, but that channel is only a few miles wide. With such a narrow passage, many experts fear that an attacker (read: the Iranian military) could „close the strait.“

The Iranians appreciate the concern: Explicit threats to the strait are a key component of their foreign policy. Alternate routes could only carry a fraction of the oil, so a disruption could cause a major price spike that would severely threaten the global economy. END_OF_DOCUMENT_TOKEN_TO_BE_REPLACED

„As I said in New York, we need enriched uranium at a percentage of 19.75%, and we are offering to buy it from whoever will sell it to us,“ Ahmadinejad was quoted as saying.

BILL O’REILLY, HOST: Now for the top story tonight. Let’s bring in Sen. John McCain for his take on Iran and Afghanistan. The senator joins us from Washington.

We’re pleased to have you, Senator, because you could be president of the United States right now. You could be facing exactly what President Obama is facing. So let’s take Iran first. Am I making any mistakes in my analysis, sir?

SEN. JOHN MCCAIN, R-ARIZ.: No, not at all. This is a very serious situation, and the solution, I think, not only lies with an attempt to impose sanctions on Iran. As you, I think, appropriately and accurately pointed out, I have very serious doubts as to whether Russia and China will be able to cooperate with sanctions that have significant effect on Iran and we can talk about why. But I think you left out something, and that is our advocacy for regime change in Iran. And I don’t mean through military action by helping, supporting, assisting in a variety of ways, including Internet access and other — encouragement of elements within Iran to overthrow the regime. END_OF_DOCUMENT_TOKEN_TO_BE_REPLACED

The Most Fruitful Target Is Iran’s Weakening Regime

The past two weeks have been a big success for the rulers in Tehran, despite what many in the United States and Europe may think. The Obama administration, the Europeans and the media have been obsessively focused on Iranian missile launches and secret enrichment facilities, on Russia’s body language, and on the likely success or failure of Thursday’s talks in Geneva. What the world has not focused on is the one thing Iran’s rulers care about: their own survival.

You have to give the clerics credit for keeping this grave matter off Western agendas. The fraudulent presidential election in June and the subsequent mass demonstrations produced the biggest regime crisis in years. President Mahmoud Ahmadinejad and Ayatollah Ali Khamenei must have been panicked at the prospect of losing control — and with reason. Western democrats, not knowing what it is like to rule by fear and force, generally underestimate what a scary and uncertain business it can be, how a single wrong move, usually a too-timid response, can spell catastrophe. Even the masterful Deng Xiaoping, faced with much smaller opposition demonstrations in 1989, believed his Communist oligarchy could lose power absent a decisive show of force followed by a thorough purge of unreliable figures in the regime. In Iran, the regime’s violent crackdown, its mass arrests of opposition figures — including the children of high-ranking clerics — and all the farcical show trials have been signs of weakness and anxiety, not confidence. END_OF_DOCUMENT_TOKEN_TO_BE_REPLACED

“We’ve Been Talking to Iran for 30 Years”

The seizure of the U.S. embassy followed the failure of Carter administration talks with Ayatollah Khomeini’s regime.

WSJ, by MICHAEL LEDEEN — The Obama administration’s talks with Iran—set to take place tomorrow in Geneva—are accompanied by an almost universally accepted misconception: that previous American administrations refused to negotiate with Iranian leaders. The truth, as Secretary of Defense Robert Gates said last October at the National Defense University, is that „every administration since 1979 has reached out to the Iranians in one way or another and all have failed.“

After the fall of the shah in February 1979, the Carter administration attempted to establish good relations with the revolutionary regime. We offered aid, arms and understanding. The Iranians demanded that the United States honor all arms deals with the shah, remain silent about human-rights abuses carried out by the new regime, and hand over Iranian „criminals“ who had taken refuge in America. The talks ended with the seizure of the American Embassy in November. END_OF_DOCUMENT_TOKEN_TO_BE_REPLACED 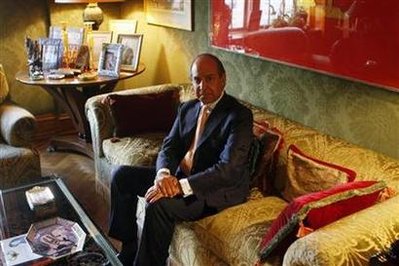 NEW YORK (Reuters), By Grant McCool, Mon Sep 21, 2009 — Hassan Nemazee, a fund-raiser for Barack Obama, Hillary Clinton and other Democrats, has been indicted for defrauding Bank of America, HSBC and Citigroup Inc out of more than $290 million in loan proceeds, U.S. prosecutors said on Monday.

The announcement follows last month’s indictment of Nemazee, head of a private equity firm and an Iranian American Political Action Committee board member, on one count of defrauding Citigroup’s Citibank.

The new indictment adds allegations that he defrauded two other banks, Bank of America and HSBC Bank USA, in a similar fashion by falsifying documents and signatures to purportedly show he had hundreds of millions worth of collateral.

The office of the U.S. Attorney in Manhattan and the FBI said he used the proceeds of his scheme to make donations to election campaigns of federal, state and local candidates, donations to political action committees and charities.

He bought property in Italy and paid for maintenance on two properties in New York.

His lawyer could not immediately be reached for comment. END_OF_DOCUMENT_TOKEN_TO_BE_REPLACED

Britain’s intelligence services say that Iran has been secretly designing a nuclear warhead “since late 2004 or early 2005”, an assessment that suggests Tehran has embarked on the final steps towards acquiring nuclear weapons capability.

As world powers prepare to confront Iran on Thursday on its nuclear ambitions, the Financial Times has learnt that the UK now judges that Ayatollah Ali Khamenei, Iran’s supreme leader, ordered the resumption of the country’s weapons programme four years ago.

„On the wrong side of the law“

The head of the International Atomic Energy Agency [IAEA] said on Wednesday that Iran broke the law by not declaring its second uranium enrichment facility when construction began.
“Iran was supposed to inform us on the day it was decided to construct the facility. They have not done that,” Mohamed ElBaradei told Indian television station, CNN-IBN. END_OF_DOCUMENT_TOKEN_TO_BE_REPLACED
Veröffentlicht in News, Reaktionen von außerhalb. Schlagwörter: Antisemitismus, Atomprogramm, Iran. Leave a Comment »

Over the River and Through the Woods to…the Iranian Bomb

Like one of those cartoon characters who run right off the edge of a cliff and just keep treading air — but you know it can’t go on that way for long — the Obama administration keeps looking for ways to pretend that Iran’s nuclear bomb program is no immediate crisis.

President Obama has extended his hand to Tehran’s uranium-loving mullahcracy, wished them happy new year, brushed aside their role in arming terrorist groups such as Hamas and Hezbollah, hung back when they murdered protesters in the streets of their own capital, and placed his bets on the bizarre premise that Iran can somehow be sweet-talked out of its nuclear bomb program. Until his hand was forced last week, he kept quiet for months about Iran’s additional hidden uranium enrichment facility on a military base near Qom.

END_OF_DOCUMENT_TOKEN_TO_BE_REPLACED

Iran Has No Right to Nuclear Technology

Accepting Iran’s „right“ to nuclear power is a recipe for disaster.

The international community has treated the recent disclosure of another secret uranium enrichment facility in Iran the way it has treated Tehran’s previous violations of the Nuclear Non-Proliferation Treaty—with calls for yet more „dialogue.“ The continued pursuit of fruitless diplomacy at tomorrow’s talks between Iran and the five permanent members of the U.N. Security Council plus Germany is based on an incorrect understanding of international law, one that was spearheaded by the Europeans and is now unfortunately shared by the U.S. president.

„Any nation—including Iran—should have the right to access peaceful nuclear power,“ Barack Obama declared in his famous Cairo speech, „if it complies with its responsibilities under the Nuclear Non-Proliferation Treaty.“

END_OF_DOCUMENT_TOKEN_TO_BE_REPLACED

Could the U.S. block sales of refined gasoline to Iran as a way of ratcheting up pressure on Mahmoud Ahmadinejad and the Iranian regime? That’s a prospect U.S. politicians have talked up for months. But as the U.S., Britain, France, Germany, Russia and China prepare for crucial talks with Iran in Geneva on Oct. 1, there’s a growing realization that the strategy might not work. „The hype around blocking gas is hugely overdone,“ says Richard Dalton, who was British ambassador to Iran until 2006 and is now an associate fellow at the London think tank Chatham House. „People use this term Achilles‘ heel, but it has got very little substance to it.“

END_OF_DOCUMENT_TOKEN_TO_BE_REPLACED

Iran put nuclear site near base in case of attack

TEHRAN, Iran – Iran’s nuclear chief said Tuesday his country built its newly revealed uranium enrichment facility inside a mountain next to a military site to ensure continuity of its nuclear activities in case of an attack — an unusually detailed disclosure that may be intended to defuse international pressure.

END_OF_DOCUMENT_TOKEN_TO_BE_REPLACED

On September 30, 2005 the Danish newspaper Jyllands-Posten published 12 drawings of Islam’s prophet Mohammed by 12 Danish artists in order to demonstrate that prohibitions on depictions of Mohammed as stipulated by Islamic law (sharia) did not trump Denmark’s freedom of the press.

In an era in which the act of speaking out in the Western world has become increasingly subject to the pressures of what we know as political correctness, this bold affirmation of free press rights by Danish journalists makes September 30 a banner day. In commemoration of their courage, then, the International Free Press Society declares September 30 to be International Free Press Day.

To mark the occasion, the International Free Press Society is presenting artist Kurt Westergaard on his first public tour in the USA, where he will be making appearances in New York City, Yale and Princeton. Since publishing his cartoon, the now-iconic Turban-bomb Mohammed image, Westergaard, 73, has required state security to protect him from violent retribution for violating the tenets of sharia in Denmark. Such threats have included an assassination plot uncovered by Danish police in February of last year. The day after the plot was uncovered, a number of Danish newspapers joined Jyllands-Posten in reprinting the Westergaard cartoon in solidarity with the cause of freedom of the press.

Evidence that the plant was intended to provide nuclear fuel turns on the relatively low number of centrifuges in the facility, which is near Qum, 100 miles southwest of Tehran.

The plant had capacity for only 3,000 centrifuges, less than 10 per cent of the 50,000 that would be needed to power a civil nuclear reactor, according to the diplomatic sources. If used to make weapons grade uranium the plant would yield enough for about one warhead a year.